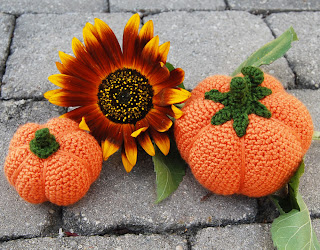 Hooray! Our pumpkin patch is ready for harvest! It's finally time to pick the best pumpkins from the patch for our pumpkin contest!

Here's what you need to do:
Visit the Flikr group and talk a "walk" through our pumpkin patch. While you're doing that, keep in mind that you can only nominate one pumpkin photo in each category. Your nomination should also fall into one of the following categories:
Once you've chosen your pumpkins, it's time to submit your nominations. Just use my nomination form and paste the URL for the pumpkin photos you want to nominate.

And just a little reminder -- you don't have to be a crochet-along participant to nominate or vote -- so let's hear from everyone!

Nominations will be open until midnight EST on 10/28/2010. After that, it'll be time to vote for the best pumpkins in the patch! Good Luck!