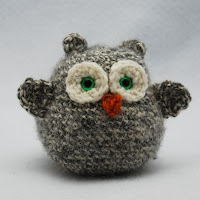 For this week's free pattern feature, I made the Small Owl by Edie Kim. Kim designed the pattern for an amigurumi workshop at the Knit Cafe in Toronto, where she also occasionally appears as a guest instructor.

Knowing that the pattern is used for a class, it's not surprising that the instructions flow a lot like a script, with steps instead of rounds that have you increasing until you "reach 36 stitches around in total." Reading through the steps, I can picture a group of crochetters sitting around a table chatting and increasing without paying much attention to how many rounds they've made. Occasionally, one will break off from the conversation to count how many stitches they have since the last time moving the stitch marker and then re-join the conversation. 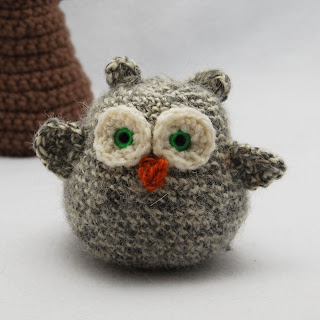 As usual, I do have a few helpful pointers for anyone who decides to make Kim's owl. First, as I mentioned, be wary of the stitch counts. They are NOT exact. Step 3 calls for you to work "incr 2, sc 1 around until you reach 36 stitches in total." But if you're trying to keep track of your rounds, this number will not get you all the way around the body of the project. Instead you end up with 5-ish rounds, give or take a few increases. Later, the pattern tells you to increase to 54 stitches. But, it also advises that you shouldn't be too worried if you're one or two off.

Second, and perhaps more important, if you want to use safety eyes for your owl, DO NOT follow the head/body instructions from start to finish. After step 13, the hole at the bottom of my owl was so small that I could not attach the eyes (and I have attached eyes through some pretty small holes!). Instead, stop after step 10 to place the eyes and partially stuff the body.

All things considered, I am still happy that I attempted this pattern and will almost certainly be making more owls. Since I prefer my rounds and stitch counts, I will probably annotate my copy of the pattern to save myself some trouble next time.