It Helps That She Is Addicted... 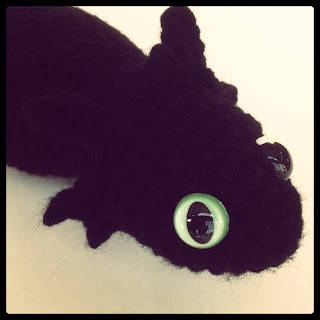 Autism has not been an easy part of our lives, but it does have some benefits -- especially with my most recent project. It all goes back to when a friend asked me if I would be willing to make up an amigurumi Toothless for her son.

For those of you who are not in the know, "Toothless" is the black Night Fury dragon featured in the Dreamworks movie, How to Train Your Dragon. The character is amazingly well done and draws on the anatomy and personalities of more animals than I can count. And... it's all black. Of course, that means that it has been extremely difficult for me to get the real feel for the dragon's shape (and translate that shape into crochet).

I looked at art from Dreamworks, fan art, images across the internet... I Googled until my eyes were about to fall out of my head. But I could not get the shape of that dragon. So, I bought the movie and settled in with my Little Miss to watch. 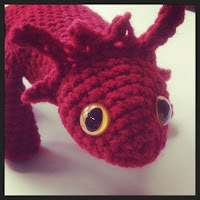 And so, after watching the movie for probably the 15th time in a week and a half, Toothless began to take shape.

My first draft was done in red (because black yarn is such a bear to keep track of stitches). And with that finished, I took a deep breath, balled up a skein of Red Heart in black, and got started. 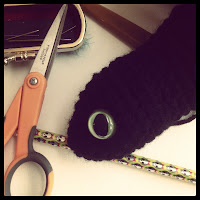 The neck was too long... for one. Remove a couple rounds there... add to the tail that was just a touch too short. 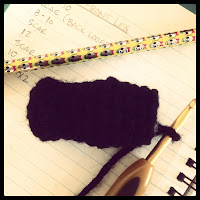 But the one that really got me? The front legs were WAY too short! That's actually the part I'm working on right now.

Tonight, we'll probably watch the movie again (because in our house, that's how we roll) -- and I'll probably decide to re-work something else. But this design? I think it's going to be worth it.

And for those of you who are wondering, there most likely will be an "Amigurumi Dragon #2" pattern coming out (inspired by our pal Toothless, of course). If you want to keep tabs on the progress, check out my Facebook page!