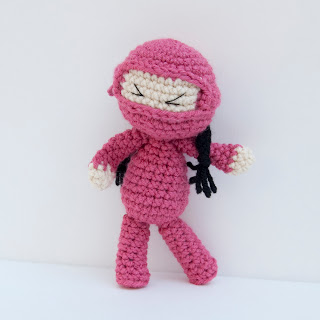 So rather than designing another doll that was just for the Little Miss to play with, this time I decided to design a doll that was completely inspired by my little miss... wouldn't you know, it came out a ninja?

And the more I think about it, the more I like it... because really, ninjas are awesome. I mean, what could we do if we each had a few ninjas in our lives?

That guy driving 55mph in the fast lane and talking on the cell phone? ------- NINJA ATTACK!

That lady who clearly saw you waiting in line — yet felt it was her right to jump ahead of you when the store finally opens a new register? ------- NINJA ATTACK!

I can see my Little Miss now, leading a pack of pink-clad ninjas, her little black braids trailing behind as she runs forward to fight for justice... 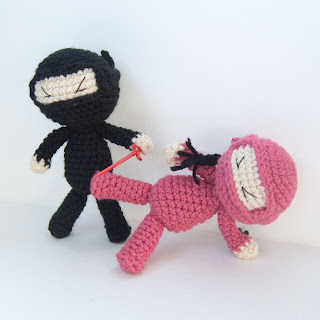 Ok... so I got a little caught up in the moment there, but how can you resist?

And since I know you're just waiting for the good stuff anyhow, I'll get to it... the pattern is ready for you to launch your own ninja army -- complete with instructions for making girl or boy ninjas.

Plus, this time around, I have an added bonus for you. I included a special section at the end of the pattern that gives you the basics of working with two color yarns at the same time (you'll need this technique on the ninja's faces). The technique (sometimes called colorwork or crochet intarsia) can seem intimidating, but it's really not. So, I hope this pattern is a great excuse to get you on your way.

Speaking of which, you can get the pattern through all the usual outlets. My Ravelry shop has the best price ($3.00 for an instant download) -- or, if you would like to have the pattern personally emailed to you for a little bit more, visit my Etsy shop.

And of course, if you want nothing to do with either of those venues, here is the magic button for you:

Now go out and take up that fight for justice -- ninja style!