A Big Project in the Books...

Yesterday I shipped out a big project that has literally been keeping me busy for the past month. If you follow me on Facebook, you know what I'm talking about. These guys. 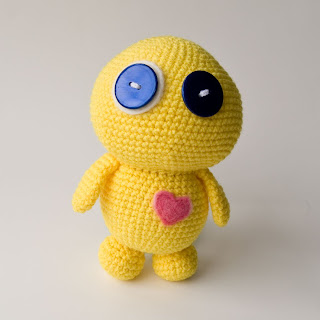 Earlier this year, I was approached by a man from Italy who loved my Angry Birds patterns. He told me that his company, Voodoo Lab, had a voodoo doll in its logo and asked if I would be interested in doing the doll in amigurumi. I wasn't sure how "heck yeah!" would translate in Italian, so I simply gave him an emphatic "sure!" And so it began.

The project started with a request for two of the logo-style voodoo dolls in chef outfits. It took several tries to get the basic design right, but after a few weeks, I had two of these little guys to show: 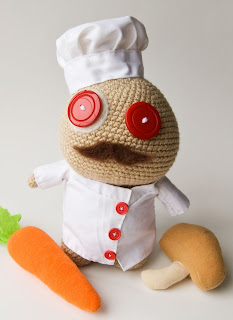 Next up, came the company's signature logo doll, the black voodoo doll with red button eyes... 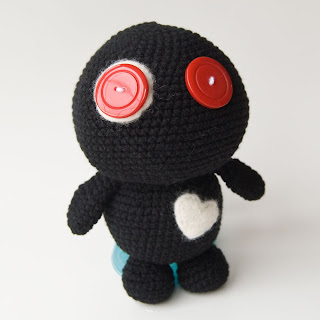 And then my favorite -- the yellow doll with blue eyes. As a fun side note, the eyes are 1 3/8 inch buttons -- which are nearly impossible to find. I came upon the bunch of red buttons by luck, but after searching every craft and fabric store I could come up with, I could NOT find any 1 3/8 inch blue buttons. So, I painted my own!

As it turns out, the new Sally Hansen quick-dry nail polish comes in a perfect array of colors that works great on smooth plastic buttons. It took a few tries to get my technique right (I almost considered going to a nail salon and asking how much it would cost to get a manicure for my buttons!), but I got two pairs I was happy with and was able to finish the dolls.

Last up was a girl version of the logo doll. Unlike the first three dolls, there were no existing graphics of the girl doll, so I got to be a little more creative with this one. I added the red heart lips per my client's request but decided that the doll was missing something. So, I added her big white bow, just slightly askew. 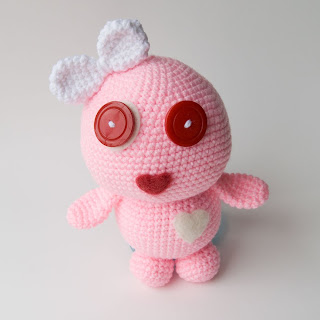 I had a lot of fun with the project, but I'm glad to be moving on to something else now -- at least for a little while. My new friend in Italy promises me that there will be more characters coming to his lineup soon and I, for one, am truly excited to see what they come up with next!