I can't believe it's been ten days since my last blog post. Where have I been? 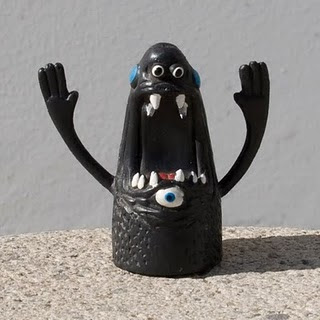 Admittedly, I have been working on a sort-of-secret project for the amazing curator and chief monster keeper of the blog, I Only Like Monsters. What do I mean by sort-of-secret? Well, I mean I can't really show you my finished project just yet. But I can tell you the details surrounding the project.

A few weeks back, Roland (the mascot of I Only Like Monsters) posted a request for brothers. As I found out, Fingermonsters have birthdays and even get birthday money (who knew, right?)

I've been a fan of Roland's for a while now -- his mistress, Janet, turns up the coolest monster designs on the web after all! So, I decided to join in the effort to grow his family.

After a few tries (and some massive failures), I managed to come up with a suitable brother for Roland. We named him Floyd. He's already made his way to join Roland's family -- and from what I understand, Roland and his new brother Floyd are already the best of friends.

So why am I keeping Floyd a secret? Well, Roland is planning on introducing all his new brothers after everyone has arrived home. I've agreed with Janet to hold on to my pattern (oh, yes... you're going to be able to make your own Floyd Fingermonster if you like) until the announcement is out. Who knows, maybe there will even be a giveaway!

So, if you love monsters (and you all know I do), I encourage you to had over to the I Only Like Monsters blog and see what new monster is featured today. And, if you make monsters, you can get in touch with Roland for a possible feature on the blog and maybe even get involved in the family project!