After round 17, your pumpkin will have reached its widest point (according to the pattern). But, let's say you want to "grow" your pumpkin a little larger... Here's how:

Take a look at rounds 8-16 in the pattern. Notice anything in particular? If you said "yes," you're right! When we were shaping the pumpkin to go out and up, I used the same repeating pattern of rounds:
So, what do you need to do to make your pumpkin even bigger and fatter than the pattern? If you think of round 17 as an "A" round (increase evenly), your next two rounds (18-19) need to be like rounds B & C (single-crochet around). Then, repeat the A, B, C pattern again (and again, and again...) For example:
Working the Middle 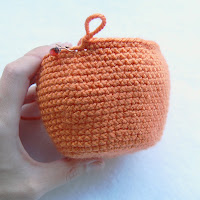 In the middle of the pumpkin (what I think of as the doldrums of the pattern), you need to go round and round without increasing. In the pattern, I have you go around four times (rounds 18-21).

If you decided to grow your pumpkin a little bigger, you may want to add a few more middle rounds to even things out -- otherwise, you will end up with more of an oval pumpkin than a sphere.

Next time we chat, we'll talk about decreasing and I'll revisit the invisible decrease technique. Enjoy!