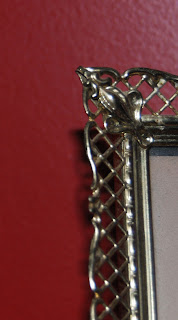 My favorite room in the house is red. I really never thought that would have been the case, but it is.

Our house is a four-bedroom model -- although the builder's primary floor plan (floor plan "A") is designed with three bedrooms. The fourth bedroom is smallish and the previous owners decided to paint it red. When I met them, the wife told me how much she loved the rich color but then laughed and said when she and her husband were painting the room, they joked about how they pitied the poor person who ever tried to paint over it.

Well, that person would end up being me. To be fair, I never actually tried to paint over the red. I gave up before I even got started. I decided that if I wanted to have my own craft room, it was just something that I was going to have to live with.

After filling the room with some of the things I love most, the color has begun to grow on me. For example, last year, I did a swap with Becky of The Strumpet's Crumpets. My bounty from this trade was a beautiful, embroidered, Halloween witch, based on an antique post card from Becky's collection. Of course, this treasure hangs in my craft room 11 months of the year (it's front and center in my kitchen during the month of October!) 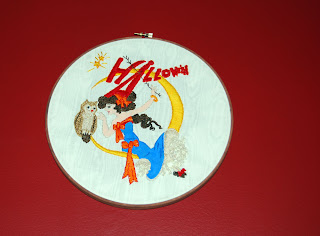 Another part of my craft room that I absolutely adore is (of course) my yarn. I have it grouped by color in square cubbies that my husband and I got at Target. Some of the cubbies are so full of yarn that you can't see the red walls, but others are empty enough to flavor the remaining skeins with a red hue. 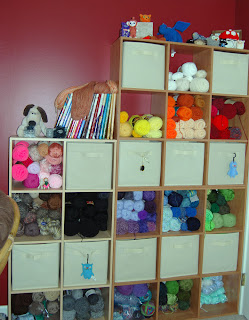 I do tend toward red in other aspects of my life -- for example, my little notebook computer is red and my favorite color to wear is red. I guess I just never thought that it would be a good idea to paint a whole room red... so much for "thinking."

And now, onto the Color My Monday mail bag...

As with so many Mondays already, my contributions this week come from my friend Hind and her daughter Butheina. 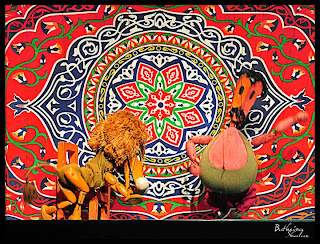 Hind tells me that the photos are from a popular Egyptian puppet musical called El-Leila El-Kebira (The Big Night). The first shows shows a lion tamer in the circus, singing a song in which he boasts about his courage facing fierce lions.

This next photo shows a belly dance performance. 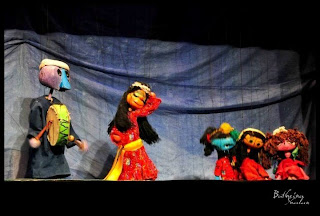 The last one is the end scene of the show at dawn, when everything becomes quiet after a long night of merry making. 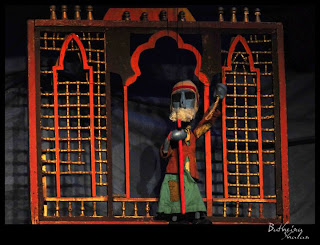 Happy Monday to everyone and thank you once again Hind for sharing a glimpse of your country! The next Color My Monday (Yellow) will represent the end of our trip through the rainbow. I hope you'll join me for our final stop by sending an email with photo attached to ibscrochet@gmail.com with the subject "Yellow."

For additional information on participating in Color My Mondays, see the original post.