The project really begins to take on a life of its own once you start to put the face on your owl. I tried to be really descriptive in the pattern to help you see where things go, but everyone knows that a picture is worth a thousand words... so, let's get started!

I like to place my ear tufts at roughly round five on opposite sides of the head. Because my ears are the same color as the body, sewing them on is pretty straight-forward. I usually work my way around using a back stitch so that each of the eight stitches in the last round of the ear is secured to the head.

Once the ear tuft is sewn on, you can pull the yarn inside the head and knot it there. Cut it if you want, or let it go -- no one is going to see it when your owl is finished.

Eyes
The positioning of the eyes can be a little tricky. I suggested in the pattern that you place the top of your eyes at roughly round seven, but there is room to go up or down, depending on your preferences. 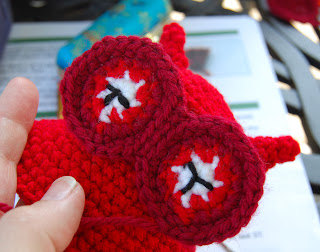 The part that's tricky is keeping the eyes level while you're sewing them on. I can't tell you how many times I've stitched around my eyes, held the owl back to look at it, and realized that one eye was lower than the other. So for this part, I recommend you save yourself a little grief and pin the eyes where you want them. The yarn can still stretch so the eyes come out crooked, but at least you won't be trying to control both slippage and stretching at the same time.

Note: If you were planning on using plastic safety eyes for your owl, now is the time to attach them. My favorite safety eye seller, Clara of 6060, has a great tutorial for attaching your eyes on her blog.

Beak
The last part of the face is the beak. I showed you in the pattern how to gather your beak to get a little more dimensionality from it, but here's a quick recap: 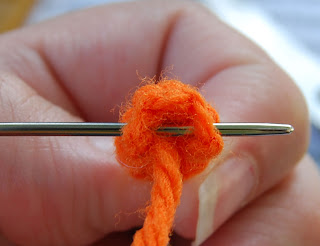 I like to nestle the beak up in between the bottom of the eyes as close as it will go. This helps to hide the somewhat ragged edge between the eyes where they were sewn together. 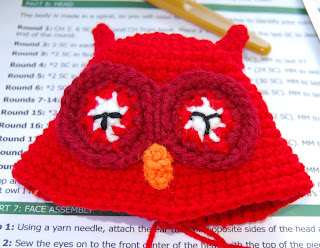 And ta-da! Your owl now has a sweet little face!