I finally got my entry for the Schmancy Olympic Challenge submitted last night. The challenge was to design a plush inspired by an event in the Winter Olympics and each participant was assigned an event. My event was "opening ceremonies," and here's what I came up with: 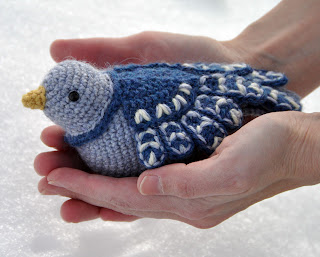 The dove has long been a symbol of peace and is recognized by many cultures. One tradition that is typically honored at the Summer Olympics is the symbolic release of doves. This was first done in the 1896 Olympics, and then in the 1920 Olympics. Since 1920, this has been an official part of the opening ceremony of the summer games.

Doves are generally not released during the winter games because it is simply too cold for the birds. But, I believe that the Winter Olympics deserve this symbol of peace and unity just as much as the summer games. So, I invented the Ice Dove.

Like their warmer-weather cousins, Ice Doves are beautiful symbols of peace and the best parts of humanity, but these pristine beauties are more suited to life among snow capped mountains and arctic pools. Ice Doves are most easily distinguished by their icy blue plumage and vibrant wing and tail feathers. 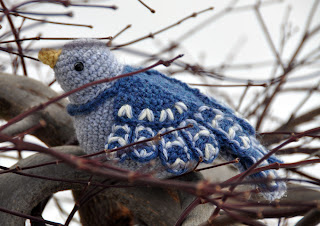 ** Photos are courtesy of my amazingly talented younger brother.