The answer to all my problems is a 'pocket troll' ?! 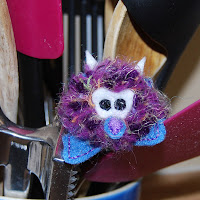 I've got problems. Deep-seated problems that no amount of therapy will ever resolve....

Ok... just kidding on the deep-seated problems, but come on. Everyone has their quirks. For me, those quirks include not being able to:
But, these two little quirks have created some friction for me. For one, I'm a rheumatoid arthritis (RA) sufferer and sometimes crochet just isn't in the picture for me. For anyone who doesn't know about the disease, I encourage you to check out this great link from The RA Warrior (RA 101). But in a nutshell, my hands can become painful and swollen and I've found that continuing to crochet through it is not the best solution.

As for the scrap yarn thing, I'm beginning to -- (Ok, so my husband would seriously laugh at my use of "beginning to")... but I'm beginning to amass quite a bit of yarn in quantities that are too small to crochet anything worthwhile.

I had been pondering both situations for a while and trying to figure out what to do when I discovered the most amazing device... the Clover Pom-Pom Maker. The other night, I decided to break mine out of the packaging and see what I could do with some of those yarn scraps.... and I made pop-poms.... boy, did I ever make pop-poms! After about 10 or 15, my husband asked me what I planned to do with them. Uh-oh. I didn't have an answer.

I played around with them and tried some different things, but today's result has been my favorite so far. I'm calling him a "pocket troll." 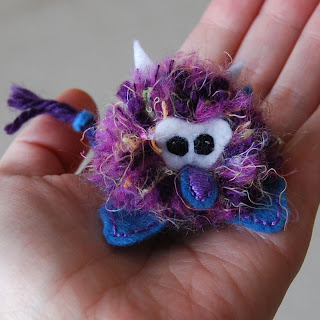 To make him, I dragged out some other scraps (this time, felt and embroidery floss), put on a strong cup of coffee and spread out by the fire place to get creative. Within about an hour and a half, this little guy was staring back at me. He has hand-embroidered features (eyes, nose, ears, and feet) and he allowed me to use up that last little bit of buttery purple-rainbow novelty yarn that I've been hoarding for so long. I sewed all the pieces on to him because I didn't want to mess up the texture of the yarn with glue and as an added bonus, the threads through his center made him a tougher finished piece. I still wouldn't try pulling his hair out though (he'll probably bite!)

So, I kept busy with something other than crochet and reduced my yarn stash... but the question now is will anyone want a pocket troll? I'd love to hear your thoughts on this little bugger!