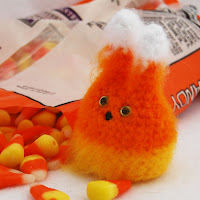 Some of you may have seen my posts on Facebook the last couple days as I slowly figured out some fuzzy whazzit mischief that's been going on around here. For the rest of you -- gather 'round, kids. It's story time!

I've been busy restocking fuzzy whazzits for my upcoming show in November and almost didn't notice that three of the little buggers had gone missing. They were the creamy white kind of whazzits that just reek of innocence and goodness, so I wasn't watching them very closely anyhow.

But later, when I went up to my craft room to get some more yarn, I found the light on. I also found the three escapees with an empty bag of candy corn and bloated bellies. I've got to be honest -- I felt sorry for them. They looked so sick that their fur had almost turned green! So, I gave them some Tums and snuggled them in to a soft pillow for the night. 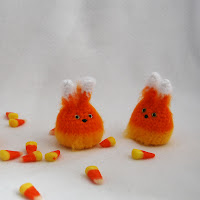 When I came to check on my three little sickies the next morning, I made an amazing discovery -- their fur had changed to the colors of candy corns! Two of the little guys were striped white, orange and yellow but the third had his orange and yellow reversed. What was going on here?!

I decided to try a little experiment and set the three of them down with another bag of candy corns. Sure enough, the two whazzits with the white, orange and yellow stripes set upon the candy corns and began munching away.

The third whazzit  took his approach a little differently. This guy delicately nibbled only the yellow ends off each candy corn! I could not believe it! 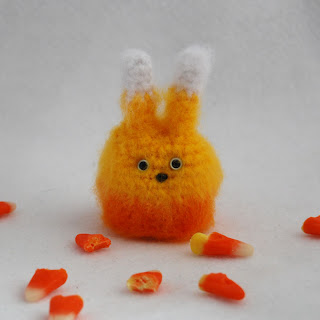 Lesson learned.. keep the fuzzy whazzits away from the candy stash. It gives them belly aches and you never know what's going to happen next!