After two months of free pattern Sundays (FPS), I guess I was just destined to end up with a pattern fail. I'm not chalking Donna Collinsworth's Inside-Out Pumpkin into a Ghost or a Bat as a complete loss, but I would advise people who are new to amigurumi crochet against attempting this pattern. Here's what I discovered. 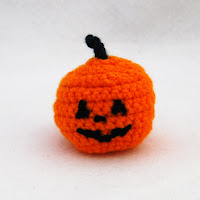 First off, there are no pictures of the back of the pieces or the work in process. As a result, it's a little difficult to visualize how the different characters are attached to each other. If you read the pattern carefully, you will see that rows/rounds 5-13 in the pumpkin and bat are not joined to form a ring, but that's your only clue that the inside-out thing happens through a vertical hole in the back.

Personally, I had a little trouble with the pumpkin stem, but I'm used to crocheting really tightly and I admit that I probably brought this on myself. My solution was to finish off after round 18 of the pumpkin and make a stem using a row of single crochets that I later sewed in. 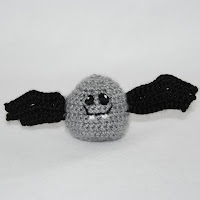 The bat came a little easier for me because I did not have to change colors in such a small area. But I did have trouble with the wings. I've been reading crochet patterns for close to 20 years now, but I could not get my wings to turn out the same. There was a lot of turning (some of it completely unnecessary as far as I could reason) and by the end of things, I wasn't even sure which end of the wing to sew to the bat.

I was planning to make both the bat and ghost inside-out dolls, but I can only conclude that a portion of the ghost instruction is missing. In the pattern, you go from round 4 to row 33. I double checked to see if it was a copy ans paste error, but alas... no.

I'm playing with some new toys right now, so the pumpkin's face is needle felted instead of glued. Gluing would have probably resulted in a more crisp look, but hey... I had fun. I decided to practice my embroidery on the bat's face.

Long story short, try the pattern out if you have a little experience in fudging... er, I mean "designing" your own way through patterns.