I've mentioned in some of my other posts that I'm the proud mother of a little girl (18 months tomorrow) adopted from Korea. Our daughter has been with us 10 months now and every day it seems like she blooms a little more.

Right now, she's really into imitating. Sounds, gestures, behaviors... you name it. And, whatever I have, she wants it too.

Most moms can sympathize with the fight for the cell phone. After all, it lights up and makes sounds, it's the perfect size for little hands, and it's forbidden (what could be better than something you're not allowed to have?) Things are no different in our house.

But yesterday afternoon, while I watched my daughter playing with a make believe purse and keys, I got a fun idea. I decided to crochet her a replica of my cell phone that would be all hers! 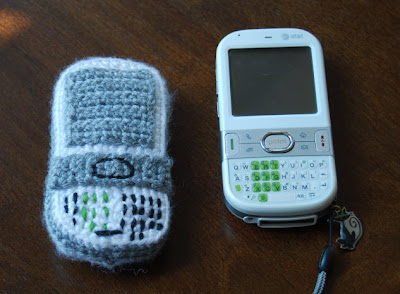 I gave her the phone last night and as you can see from the shagginess, it's already gotten lots of love. We played "ring-ring.... hello?" for almost a half hour, with my daughter putting her phone up to her ear -- just like mommy. She also chewed on it a bit... Ok, a lot. So, the shape got a little squished out. But, all together, I'm happy with the design.

The only thing that bothers me are the buttons. I think they're a reasonable representation of the buttons on the real phone, but they just came out so sloppy looking. I stitched each button on the face of the phone with worsted weight yarn, and my fingers were almost numb by the time I finished. I must have placed every stitch, ripped it out, and then replaced it at least twice.

So, I'm putting the phone out to you guys... do you have any ideas to make the buttons more uniform? I'm not locked into using yarn... but I do want the end project to have no choke-able items, so things like fabric paint or beads are probably out. What do you think?