I really need to get past this frog addiction...

It started out innocently enough with the poison dart frogs. I just wanted to so something challenging with some really incredible colors from nature. Then I found Roman Sock's blog and her Instant crochetification pattern for -- you guessed it -- more frogs. Well, actually toads... but the pattern itself says:

"According to wiki, 'any distinction between frogs and toads is irrelevant,' so you can call these little darlings what you want!"

I have finished five of the little guys so far and I am WAY addicted to this pattern. It's cute and simple and works up in a little more than an hour. Granted, I think there are some mistakes in it... for example, in one of the rounds it tells you to dc (I think it's supposed to be sc). But, if you have made a couple of other amigurumi patterns before tackling this one, you should be able to figure out what's needed.

Well, my fingers are itching to finish frog number six, so off I go. Hopefully, I'll be able to lick this frog addiction and get back to some other new patterns soon! 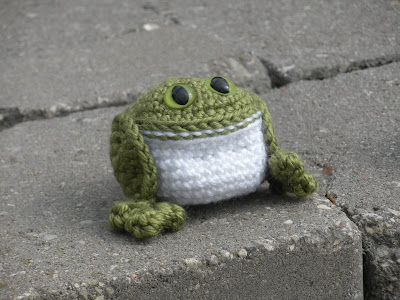