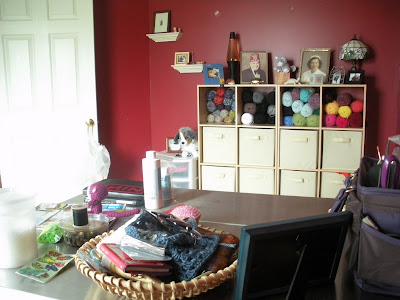 I've had a recent bout of creative inspiration and have gotten back to designing some of my own patterns again. It's felt really good to just let go of some responsibilities for a little while and enjoy my art. Of course, the gigantic to-do list for getting the old house ready for sale hasn't gone away, and you can probably see from the picture of my craft room that we still have a lot to do in the new house, but a gal deserves a break once in a while, right?

So, you have all seen one of my latest designs (the cupcake) and I really had a lot of fun making it. I actually made two and gave the prototype to my daughter. She's teething right now, and it's pretty funny when she crams the cupcake in her mouth to massage her gums. And, yes... for those of you who are concerned, my daughter's cupcake was made with yarn eyes so there's absolutely no choking hazard.

After the cupcake, I was still feeling the creative itch, so I've been working on another design. As usual, the prototype is not exactly what I want... but I took a picture of it anyways... 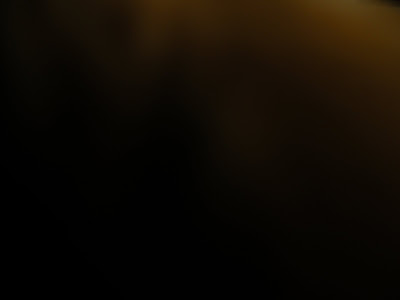 Ok, ok.. so there is a funny story behind this picture. I had my newest creation set up on the floor in the dining room (better afternoon light there). My daughter was playing in the family room and one of my cats was sunning himself by the dining room window. As soon as I turned the camera on, it was like a stampede to see who could ruin the picture first (in case you were wondering, the cat won). I got a few extreme close-ups of the cat's back (like the one above) as he wove back and forth between the camera and my new amigurumi. Then, my daughter tore into the room, scooped up the ami, and crammed it right into her mouth.

Sadly, I did not get any good pictures before my newest creation was covered in slobber, so you're going to have to wait until I can put another one together to see the pics. But I guess that will just add to the intrigue... what IS she working on now?