Ok... so, I'm not exactly going to talk about shrinking the entire pumpkin like Shatteredshdw27 did here, but it is time to talk about those decrease rounds. By now, you've already built your pumpkin out and worked through those doldrums in the middle. If you've been following along with the whole pancake shaping analogy, it's time to start adding some "smaller pancakes" to the stack. 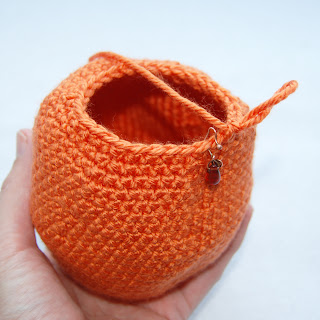 See any decreases here? Nope! Neither do I!

Extra Large (Round) Pumpkins
If you decided to grow your pumpkin a little larger than the pattern called for, you're going to need to compensate when you do your decreases by adding some more rounds. Just like when we were growing the pumpkin, I used a repeating pattern to decrease the size. That pattern is:
So, if you chose to make your pumpkin 72 stitches around (for example), you'll need to throw in one extra set of the A, B, C decrease pattern. 78 stitches around? -- throw in two extra sets of the A, B, C decrease pattern. 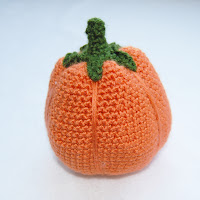 
To get this look, I knew I needed to decrease quickly at first -- then more slowly. Let me show you how it would have looked in pancakes...

First, I built up and out -- just like the pumpkin #1 pattern:

Next, I threw in a couple of rapid-fire decreases:

After that, I began to decrease more slowly by adding a few rounds where I just single crocheted in each stitch: 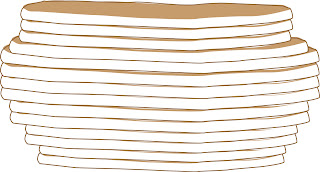 I continued working this way (throwing in a decrease after a few rounds of single crochet) until I had roughly the height I wanted and about 30 stitches left in the round. 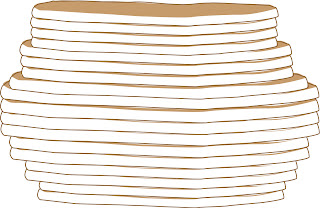 Then, I finished it off the same as the pumpkin #1 pattern! 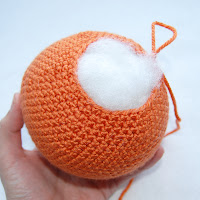 Once you get to 30 stitches in your round, you should probably stuff your pumpkin. You can wait until you get even fewer stitches or you can do it sooner -- but after playing around a bit, I decided that 30 was the optimum round size for me.

As I mentioned in the beginning, stuffing is really up to you. For items I plan to sell, I use 100% new Poly-Fil. Honestly, it's just easier to keep track of the fiber content that way and I don't have to put any disclaimers out to protect myself from the fiber police.

But, you can really use pretty much anything (softish) to stuff your pumpkin. In her Flikr group entry, Dsecrist says she used plastic bags (with smashing results -- in my opinion!):

You could also use fabric scraps, some beans (to make a bean bag), or a number of other items. My mother-in-law even suggested using shoulder pads that had been cut out of blouses!

I can see that this post is getting rather long, so I think I'll save shaping the "lobes" of the pumpkin for next time. Let me know if you try any unique fibers for stuffing or if you decide to make a tall skinny pumpkin. I'd love to hear how it goes!