With Oddmall less than three weeks away (May 8), I've been putting a wiggle on getting some of my favorite designs ready for the show. This week has been a week of dove making. While colorful and beautiful to look at, I think these guys are probably the hardest on my hands. LOL -- you should see all the typos I've had to go back and remove from this post due to sore fingers from yesterday's dove assembly marathon!

I don't talk a lot about my assembly process, so I thought you might like to see some pictures from yesterday afternoon. This picture shows three of my works-in-process (WIP) doves. All together, I assembled four doves yesterday afternoon (assembly takes about 1 hour each after all the bits are made). 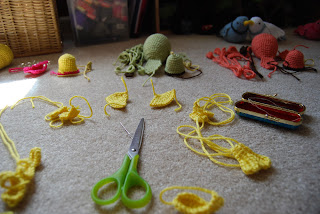 As you can see,my favorite place to assemble amigurumi is a freshly-vacuumed craft room floor. It gives me room to spread out so I can see all the pieces as I put them together. 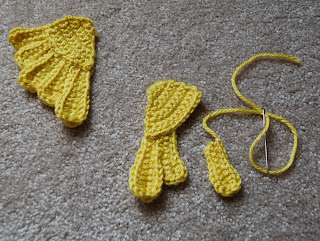 There are five feathers on each wing -- plus two for the tail. Each feather is stitched in place individually and then layered against the feather before it using an invisible whip stitch on the back side of the wing. 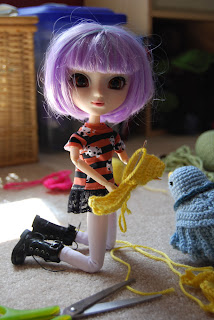 Maura thought she'd give it a go, but discovered that sewing feathers just isn't her thing. 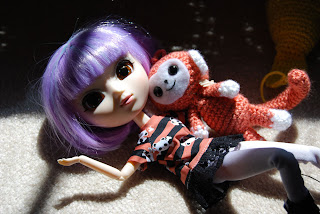 After a couple unsuccessful tries at getting the second feather on, she decided to relax with Penny the monkey in a sunbeam. 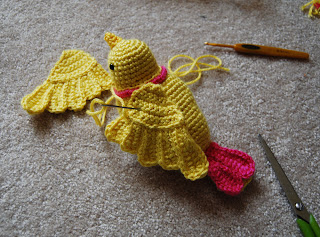 Assembling and attaching the head is another project in and of itself -- why does attaching those 6mm safety eyes have to be so difficult?! But once the birdie has a good head on her shoulders, I can go ahead and attach the wings. I like to tack them in place before I sew to make sure I get good positioning. 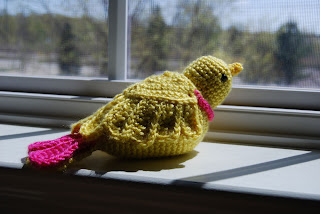 Finally, the finished dove -- ready to fly to her new home. I just love the way she looks in the afternoon sun!