I try to keep my personal posts in my family blog, although that can sometimes be a little difficult when you're doing something you really love -- like creating little crochet critters. And, today is one of those occasions where the lines between the two are just a little blurry. But let me start at the beginning...

I love Barenaked Ladies (BNL). No, not naked chicks... the band. Actually, to be more correct, I loved BNL with Steven Page. Not to say that I won't give the "new" BNL a chance, but that's another post entirely....

When I found out that BNL had released a children's album, I knew I had to get it for my daughter. Of course, Snacktime! was everything I hoped for and more. But lately, I have had track 2 running through my head... over and over and over again. It's called The Ninjas and the chorus goes:

Oh, Ninjas are deadly and silent
They also are unspeakably violent
They speak Japanese
They do whatever they please
And sometimes they vacation in Ireland

To add to it, I found myself watching an extremely BAD Kurt Russell movie on Thursday night while drinking cheap wine. Throw in a free pattern from Lion Brand (that I ended up not liking anyhow), and you get this: 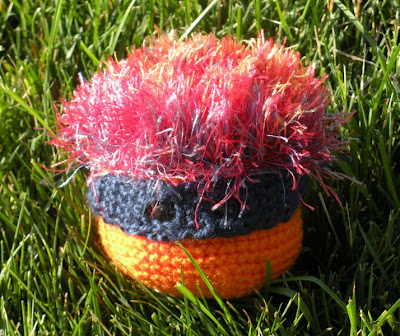 I'm not sure exactly what it is, and I know I want to tweak the design, but it's the start of something.... Or, maybe not. Whatever it is, it has a cute little mask that hides its identity... except when he trusts you enough to reveal his true nature... 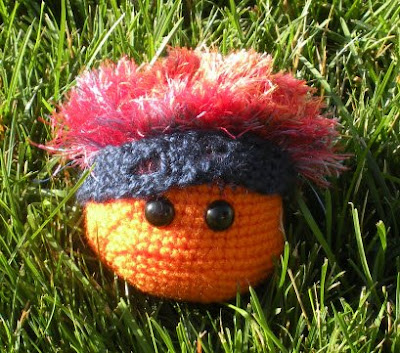 Oh, where will the creative process take me next?