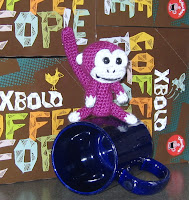 A lot of the amigurumi I have been making so far have come from patterns that I purchased or found free on the Web. My goal was to learn the basics of making amigurumi so that I could begin designing my own dolls.

Believe it or not, there are "rules" to making an amigurumi doll -- well, really more guidelines than rules. For example, a lot of true amigurumi dolls are crocheted in a spiral as opposed to rounds. Crochet for amigurumi also uses a smaller hook than you would expect. For example, a lot of my worsted weight yarn projects use a G hook or larger. But, for the amigurumi, I am using an E hook. (For those of you who don't know crochet hook sizing, E comes before G in the alphabet, so that means it's a smaller hook size.)

I could go into a lot more of the nuances of making amigurumi, but we'll save that for another post. Today, I want to share my first totally original design -- the Java Monkey. The purple one pictured in my blog is my third iteration. The first Java Monkey I created was... well... scary. Unfortunately, I don't have any pictures of that one because I cannibalized the parts to make version 2. 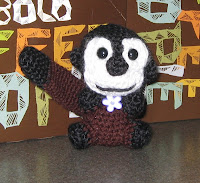 Version 2 was cuter than version 1 (hard not to be), but my husband and I agreed that it still wasn't right. I had tried to be realistic with the monkey's coloring (based on a photo I found of squirrel monkey) but the black, brown and white just weren't cutting it. The nose on monkey #2 was also wrong. Granted, it's an imaginary animal, so I could do anything I want with it... but that nose just bothered me. Long story short, the last time I saw version 2, he was laying on my daughter's bedroom floor -- discarded and forgotten.

For version 3, I selected fewer, brighter colors. I changed the nose from a crocheted circle to a couple stitches. I also made the arms loner and the tail thinner. The result is a lot more "monkey-ish," I think.

Last night, I started on version 4, which will essentially be a cleaned up copy of version 3. I'm also using version 4 to test the pattern notes I wrote down as I constructed version 3. With any luck, I should have a completed pattern this weekend and some Java Monkies looking for homes on Etsy very soon!